Yesterday we had our third cluster meeting at the UMC in Gwiria.  We again had a carload of youth for the hour and half drive through very rough, very wet roads.  We arrived just before 11 am and were greeted by 50 or so youth.  They welcomed us with songs and dancing as I have found to be very common.  The elders formed a line and greeted each of us with a vigorous handshake.  When we were finally seated the elder of the Gwiria church apologized for not being prepared with an acceptable welcome.  He said we came before he expected and asked if we would please allow them to welcome us properly!  I couldn’t believe that there could be a welcome better than the one we already received!  But the youth gathered together, pulled out the drums and undungus and sang several more songs.  I felt very welcome.

I have come to understand that, while in Africa, one has to be able to wait very patiently.  The songs were finished and some of the children remained in the church while others headed somewhere else.  We were seated at the front of the church facing the congregation and the people who remained inside with us sat quietly.  Just outside of the church there were some elders gathering and bringing chairs for themselves.  We seemed to be waiting for something, but I had no idea what.  This went on for more than 30 minutes!  I have given up on trying to figure out what is happening during these times; I have found that more often than not others don’t know either.  So we waited.

Finally, someone must have given the high sign that it was time to start, because suddenly Peter stood up and opened the program!  I looked around I saw that many more people had arrived during this time of waiting. They continued to trickle in as we opened with speeches from pastors and important people in the church.  When all was said and done we had upwards of 140 people gathered in and around the church!  This not only included people from the three surrounding United Methodist Churches, but also from the ESC and Catholic Churches.  I couldn’t believe it!  I said a quiet prayer to myself hoping that I could somehow manage to get this many people organized and divided into seven groups.  To my surprise and extreme satisfaction, we were successful! We all gathered into a HUGE circle and counted off.  Everyone participated and we were able to begin a very successful Bible study!  Like Peter said, “Imagine! This many people of different ages, from different churches, all together studying Jesus.  Praise the Lord!”

The program lasted much longer than we expected, and an hour and a half after we were supposed to have started home the chief of the village told us that the four churches had a gift for me.  My heart immediately began to pound.  You see, receiving gifts is something I have never felt comfortable with.  My face allows the giver to read my thoughts and feelings like a book- so I often fear that I may unintentionally hurt his or her feelings.  My family often reminds me of a time when I was young and my mom had spent hours sewing a special doll for me.  When I opened it on Christmas morning I crinkled my nose and pronounced “It’s a FAKE Cabbage Patch!” and dropped it back into the box!  I always fear that I will again be attacked by the not-so-subtle disappointment, thus I tried my best to prepare myself to receive the gift as the youth filed out of the church to prepare to present it.  The elders had me stand with Peter in front of the church and as the youth sang and danced their processional, I began to think about what this gift might possibly be.  I was relieved at first to think that maybe the gift was the song the youth was singing to me.  Sometimes they prepare special songs that include the person’s name and special words of encouragement.  But, since the song was being sung in a language other than English, I was able to rule that out straight away.  My next guess was that maybe they would present me with a basket.  Fred and Libby had been given several beautiful baskets from a church just last Sunday.  As I thought about that, I remembered that the first week they were here they had been presented with several live chickens.  I hoped that if I was handed a live chicken it would at least be upside down.  I have learned that if you hold a chicken with its feet above its head it soon stops flopping around.

The youth cleared the aisle and a gentleman who was holding a rope appeared. He yanked on the rope and a goat reluctantly came forward!  As he handed the rope to Peter and me, I had lost all thoughts of keeping my facial expressions in check.  I hoped that the shock I was feeling was not written all over my face!  All I could think was “A goat! What in the world am I going to do with a goat?! Please, Lord, don’t let them ask me to eat it right now!”  What a gift!

I expressed my appreciation as best as I knew how.  I was glad that Peter was there to help me.  I have been here long enough to know that a goat is a very special gift.  A goat is much more expensive than a chicken and it could be used to feed many people.  In Sudan if a family has a successful harvest they will often use the profit to invest in a goat.  Steve has told me that one person could not possibly afford to give a goat- it takes many people combining their money to give such a gift! I am humbled by the generosity of these people and can see how much they appreciate the training and encouragement that has been given to them!

Though I am very appreciative, I cannot help but laugh at the fact that I am now the owner of a goat!  What in the world will I do with a goat!  The question of transportation was immediately in my mind.  We had come so far in a vehicle that was already packed full.  I couldn’t imagine how we were going to fit the goat in there with us for such a long drive.  Peter turned the goat over to Mark and asked him to take care of it.  To my surprise, when we headed out of the church to return home the goat was tied to the top of the LandCruiser!  I expressed my concern to Peter and Mark- how in the world would that goat ride on such a rough road without falling off!?  Mark assured me that he had tied him tightly.  ‘Great,’ I thought, ‘the goat will not only fall but would be strangled in the process!’  After seeing the look on my face, Peter put his hand on my shoulder and said “Don’t worry, Elizabeth, it is an African goat.  It knows how to ride this way!”

So here I am, now the proud owner of an African goat!

“A very fine goat, indeed!” Alex said as he pulled on the goat’s beard.  “He is old enough and will soon be ready to eat!” 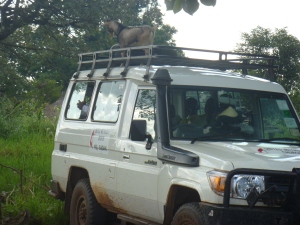 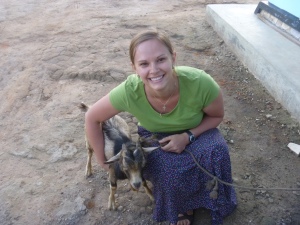 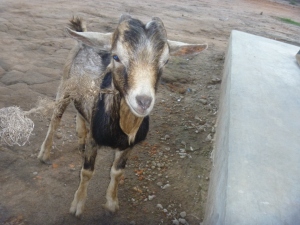 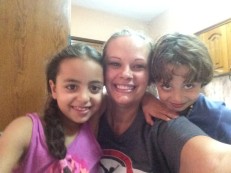 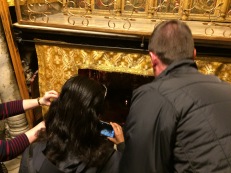 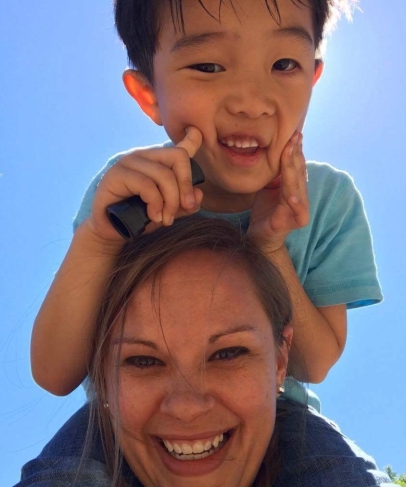 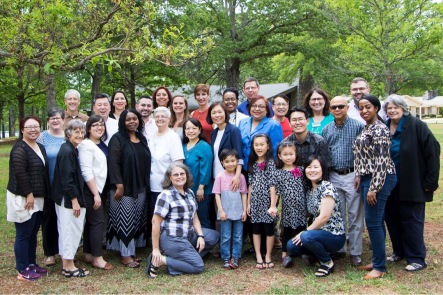 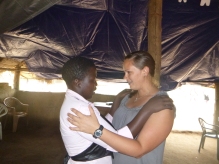 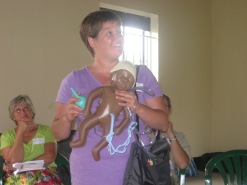 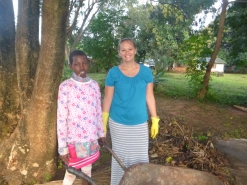 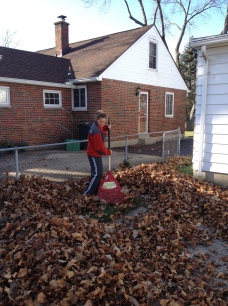 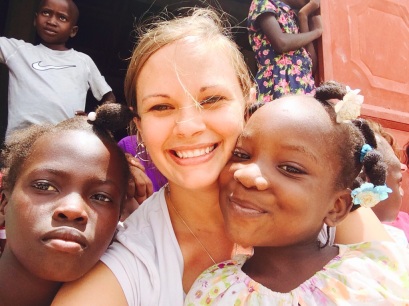